How do you take a vision—a world where all 7 billion human beings can belong anywhere—and make it into a reality?

Douglas Atkin tells us about the journey that he has gone through in order to . He sought to answer two questions about cult branding: WHY do people commit to certain organizations and WHAT does it take for them to do so?

Douglas Atkin has been studying the culting of brands for years, having conducted interviews with and about members of various “cults” or cult-like brands, from Hare Krishna to Apple. As Airbnb’s global director of community, he takes that work into Airbnb to mobilize their hosts and guests to take action and keep the sharing economy alive.

“A movement is a community on the move,” he argues. So how do you create communities that move to scale and take action?

This is precisely where Airbnb shines. Airbnb is community driven. The community scales and takes action. It is now a brand with a cult behind it and even a community-designed logo. When Airbnb relaunched their brand, 80,000 community members created their own versions of the logo.

“It wasn’t just the launch of a logo, it was the launch of a brand… the meaning attached is that all Airbnb stands for, at the end of the day, is that anyone can belong anywhere.” Just like the community was able to give a hand in building a logo, you too can have experiences in areas otherwise might not feel comfortable or even be able to reach.

Most successful groups have a clear purpose, Douglas tells us. When Airbnb was met by opposition all over the world, the community mobilized and brought the opposition down.

“When a tourist comes into someone’s home, the normal social arc of a stranger becoming a person’s friend is compressed [from years] into seconds… Complete strangers… sit on your toilet and walk around half naked from the shower.”

This phenomenon is what the community defended in cities like San Francisco. When you’re looking to create a movement, that vision must be elevated into a purpose. It just has to be “ridiculously ambitious,” Douglas tells us.

“Every Community Needs a Mission Statement”

Douglas argued that every community needs to stand for something. While it may seem like a lofty nebulous goal to create a mission statement, he actually broke it down into the following easy-to-identify characteristics: The Snowflake Model and The Community Commitment Curve

By combining amazing field organizers with a powerful CRM and all the tools they needed, Airbnb was able to get a 90%+ conversion rate on their outreach to hosts. Such an astronomical number seems unbelievable to us, but Douglas outlined how it was possible. He then showed us the Obama campaign’s “Snowflake model.” The idea behind the Snowflake model is that you find others to take action and do work on your behalf, taking them under your wing, training them, and letting them do the organizing. Why? Because they all have their own communities to tap into, each one building a bridge back to your brand.

The Commitment Curve is also part of this model. Douglas explained that you can’t start with big asks like “host a family in your home for us.” Rather, they start out with things like asking people to sign a petition and slowly make larger asks as people become more and more deeply engaged with your brand’s mission. As you move up the curve, you’re asking community members to do more and more and they’re feeling more comfortable doing it as you’ve created trust and a deep relationship.

The ultimate goal of any community should be to create a movement for positive change in the world, or as Douglas reminded us with a quotation by Margaret Mead:

“Never doubt that a small group of thoughtful, committed citizens can change the world; indeed, it’s the only thing that ever has.” 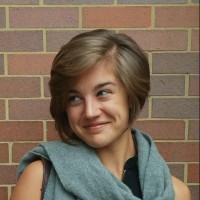